Puerto Ricans, the Labor Movement and the fight against “Exploitation,” 1956-1965 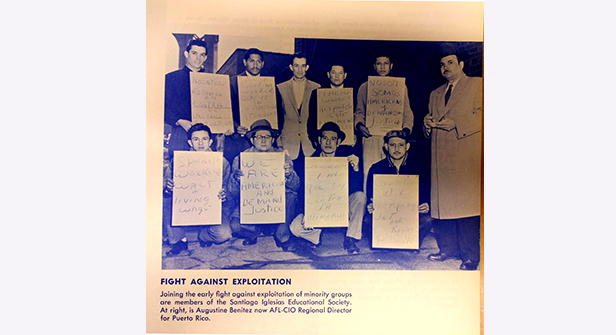 Many thousands of the migrants from Puerto Rico that migrated to New York in the late 1940s and early 1950s worked in factories that had the worst wages and conditions that the city had to offer. These factories had no unions, or had mobster-controlled or corrupt unions, and employers constantly violated safety and wage standards. Workers usually received the federal or state minimum wage or less and had few means to improve their income within these plants through negotiation, promotion, seniority, upgrading, bargaining, or overtime pay. Most of the time they received no benefits or representation for their higher monthly dues and initiation fees, at a time when most of the members of “legitimate” unions made well above the minimum wage, had gained modest or signfiicant vacation, sick days, seniority protection, and were in the process of establishing pension contributions and medical services.[1]

Coinciding with the peak years of Puerto Rican migration to New York City (through the Korean war years, 1950-1955) many of the “legitimate” unions were embroiled in the purge of Communists leaders, the effects of the Taft-Harley Act and other anti-labor efforts led the federal government and business interests. Most unions were not paying much attention to unorganized, low wage, immigrant workers in the early 1950s. This gave mobsters and racketeers opportunities to expand their presence, to the point that they came to control a few union locals within well-established AFL unions and also many "independent," shifting “fantasma” unions, as Puerto Rican workers took to calling them. Journalists noted how the practices of corrupt unions were familar to Puerto Rican workers:  “A Spanish-speaking organizer who has worked for several unions in New York explained two of the most important concepts of the trade…A "black and white contract" is one which provides no clauses for wages above the legal minimum wage. No provisions for sick pay, no provisions for rest periods, no provisions for seniority and, in general, the minimum benefits that the employer can give the worker. The "milk date" is the day the contract runs out and the union leader returns to the boss to extract a fee (milk) from him for the continuance of the contract, which protects the boss against the possibility of demands from the workers.[2] The experiences of recent Puerto Rican migrants and others with corrupt unions and exploitative bosses were extensive. Their stories led to dozens of articles in the Spanish and English press, they were heard at the McLellan hearings in Congress and were chronicled weekly in the Association of Catholic Trade Unionist’s Labor Leader, just to mention the most prolific sources.

Continue to Puerto Ricans, the Labor Movement and
The fight against “Exploitation,” Initial Efforts

[1] As acknowledged by the Migration Division, union, and city officials, many of the factories in this sector were sensitive to the availability of new immigrant workers who would work for low wages, encouraging the opening of new low-wage factories and workshops.