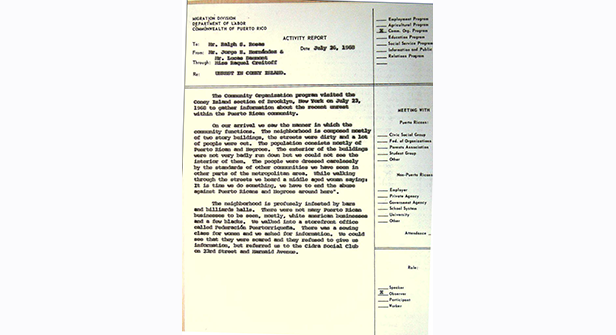 “Puerto Rican” riots originated in the experiences of concentrated urban poverty and oppressive policing in US ghettos that many Puerto Ricans migrants and their US-born children confronted (sometimes together with Latinos of other backgrounds). These riots were not restricted to New York City. Most urban centers with large numbers of Puerto Ricans experienced a riot or large confrontation with police sometime in the 1960s or1970s, including multiple cities in New Jersey and Connecticut.

The scholarship on Puerto Rican riots is not extensive. The only scholars to have examined Puerto Rican participation in riots in any detail are Olga Wagenheim, Michael Staudenmaier and Llana Barber.[1] This work is drawn from a forthcoming book that reviews riots in NY, NJ and Connecticut. This essay reviews some of the evidence and narratives about a few of these riots and confrontations.

Throughout the 1950s and 1960s, police-crowd conflicts were common in Harlem and other predominately black neighborhoods policed by overwhelmingly non-Puerto Rican white policemen. Crowd responses to arrests, abuse or confrontations with police could lead to larger conflagrations, sometimes with hundreds of participants. Sometimes the conflicts would start between Black, Italian, Irish and Puerto Rican youth, perhaps gang members, but these fights would lead to larger conflagrations when police arrived and become confrontations with the police. During the 1960s, riots became more common, essentially the product of the intersection of policing, racism and concentrated urban poverty.  But we know little about the narratives and causes of most of these riots.

The tensions between Puerto Rican barrio youth and the police increased when a policeman killed two Puerto Ricans on November 15, 1963. Victor Rodriguez and Maximo Solero were arrested for disorderly conduct. Police claimed that one of them pulled a gun while under arrest in the squad car and that the shootings were justified. The officers were not charged. Doubts remained about the story and public protests were held, including pickets at the local Upper West Side precinct, organized by the recently formed National Association for Puerto Rican Civil Rights.[2]  Weeks later, on February 1964, an off-duty policeman killed a fleeing Puerto Rican youth after he intervened in a fight outside a bar. The funeral of Frank Rodriguez led to angry outbursts and charges of police abuse. Community leader Gerena Valentin accused some police of acting “as if they were running a plantation.”[3]  These events, and many others which have not been well documented by historians, led to increasing tensions and led community leaders to further alarm about how certain neighborhoods and Puerto Ricans people were policed.