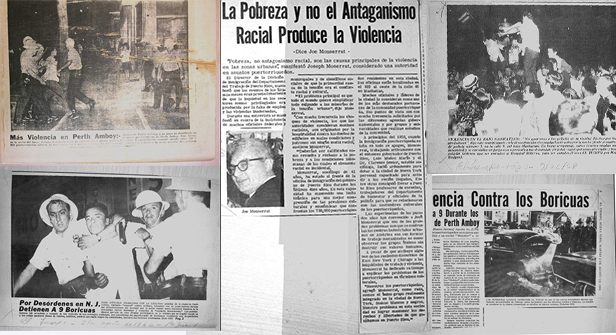 Perhaps the best-known Puerto Rican riot (or barrio revolt) did not take place in New York but in Chicago’s near-Northwest side after a Puerto Rican youth was shot by police in June 1966. The riot started when police responded to an argument between a tenant and his landlord at a nearby pool hall, although there are also alternative stories about the immeediate trigger for the riot. About 1000 people were involved in the disturbance while many hundreds more  came to the area to watch at the intersection of Damon and W. Division St.  When a policed released a trained dog and it bit a 20-year-old, the conflagration intensified. An additional 100 policemen were called. Around 10PM, 400 people remained in the area. Bricks and bottles were thrown at police cars and some were set afire, while firemen responding to the fires were attacked. One journalist was attacked by the crowd but was rescued by other Puerto Ricans from the neighborhood. A fire hose was taken from firemen and used against the police. Spanish-speaking policeman were called to speak to the crowd with bullhorns while local community leaders tried to calm the crowd, including Rev. Donald Headley.

Violence began again that evening with youth throwing rocks and smashing cars in store windows and traffic lights, doing some looting and “harassing” the police. The police response was more intense. Seven people were shot, and others injured in the second night of rioting on Division Street. Community leaders were now asking the police to leave the area and allow them to keep the peace, and apparently the police did withdraw their cars. A rally of 1200 people at Humboldt Park was organized and some of the speakers made charges of police brutality. But rioting continued after the event, and police returned dispersing crowds with clubs and firing several shots. Men injured by the police returned to the streets complaining of the use of force: “we are not supposed to be beat up like animals.” As squad cars drove by a young man yelled with fists raised in anger: “Police, go home, get out!” Community leaders, again, came out this time with ribbons of red, white and blue so the police could identify them (and presumably not beat them up). Police and crowds continued to mingle into the second evening, but it was clear that besides the initial incidence of the shooting, and the anger created by the use of dogs, the very presence of the police continued to strengthen the response from the youth.

After the riot police ordered an ‘integration’ of police crews in order to spread out the presence of minority officers, to expedite the removal of dogs from disorder scenes, and to appoint a black commander. The officer responsible for inciting the riot was moved to another district, with the acknowledgement that he was known for “starting trouble”—this led to his resignation. Community leaders agreed “that police tactics in the neighborhood had long been unnecessarily severe.”[5]