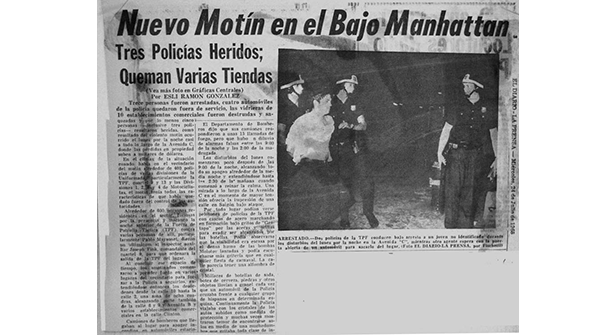 The following year it was the Puerto Rican blocks of the Lower East Side that erupted at the same time as the Coney Island riots.  In these events the community’s intense rejection of the Tactical Police Force became a central part of the story.  During July 1968, fires were set, and cars and stores attacked on 5th St. between avenues B and C.  On the 22nd, a Puerto Rican (Victor Soto) launched three firebombs into a lower east side bar (Jack and Joe’s Bar and Grill) at 9th and Ave. C, apparently for the beating of a paisano at this bar.

The riot started with fights between PRs and Eastern Europeans on Friday night at 9th and Ave C. Police responded but were attacked when they tried to disperse the crowd watching.  A local priest was not able to stop the initial confrontations. The riot started at 9pm on Friday 23rd and lasted through Tuesday, on 9 blocks from 2nd to 10th St. and Ave C, with at least 200 youth.  In the first night, four police cars were destroyed, shops attacked and 13 arrested. 400 police were mobilized, while 600 citizens came out, angry at the way that the Tactical Police plaice had been mobilized the previous night. Bottles and gunshots were aimed at the police. Police and firemen were wounded. 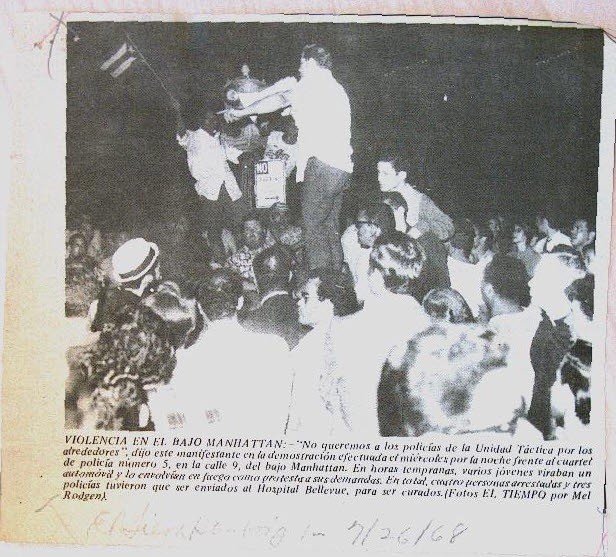 A committee of local activists secured a commitment on the 24th that the TPF would be withdrawn.  Gerena Valentin concluded that the TPF destroyed in one day the work that the precinct achieved by arresting and beating up people unnecessarily: “their whole attitude is that we are foreigners.” Leaders walked the streets on the 24th as street life became more normalized. The community was united in its rejection of the TPF and the unilateral demand that it be withdrawn.  But as in other riots the community leadership was divided, some acknowledging that there were local, grassroots groups that “[did] not accept the leadership of any committee.” On the final day of the disturbance, Tuesday, a peace march led by Catholic seminaristas, carrying pictures of Kennedy, Martin Luther King and Hubert Humphrey and a sound truck playing Puerto Rican music marched in the area, stopping at C and 6th st.  Down the streets more bottles rained down on the police and police charged the group…”cerdos fascistas” yelled the crowd…but calm was reestablished by 11. By the 27th, with the withdrawal of the TPF things returned back to normal. “They took the TPF out that’s what happened.” Many shop owners had their businesses damaged or destroyed, many of them Puerto Rican, some of them accusing the police of not doing enough to protect their property.[8]