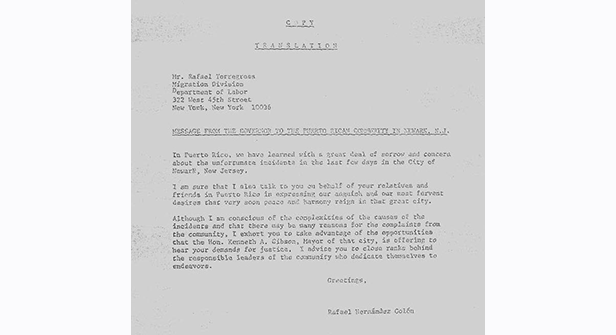 In 1974, Newark again turned violent when police attacked a family-oriented Puerto Rican Labor Day festival of thousands at Branch Brook Park.  Puerto Ricans constituted 7% of the city’s population, 29,000 of 382,000, having doubled between 1960 and 1970 while the city’s overall economy and population declined. Somewhere between five and ten thousand people attended the festival including many children. When gambling and drinking began on the edges of the park and one individual became violent, police dispersed the gamers and vendors. Things escalated when a horse was stabbed, a child knocked down by the horse and panic ensued.  One account described the incident starting when a police horse trampled a small child in their attempt to stop the use of a BBQ.  Hundreds of police were called to the area, guns drawn, wielding clubs and shotguns.  Shots were fired by police and three Puerto Rican men were injured by shots and six others beaten.

Investigators claimed that persons incited the crowd to violence, and some threw stones and trash cans at the police.  A crowd gathered and set a car on fire, and police withdrew.  A flag planted atop a police car by a protestor produced an iconic image from this riot.  The first evening confrontations continued around Columbus homes and east ward, with molotves hurled at police and buildings set afire.

According to historian Olga Jimenez, Newark’s Black mayor, Kenneth Gibson, against police advice, marched with 800 former picnickers to city hall to discuss what had happened.  Community leaders requested the release of those arrested, the removal of the police from Puerto Rican social events, and the creation of a committee to investigate, which the mayor acceded to.  An ad hoc committee, the Hispanic Emergency Council, was created to maintain pressure on the mayor, and demand the hiring of more Spanish speaking police.  A second group demanded a meeting with the mayor and had more radical demands, including an end to police brutality, a civilian complaints review board, an end to tactical and mounted units and the firing of the police chief.

The next day the police commissioner announced a curfew for all under 18 after a group in one car was arrested with two dozen molotovs. Confrontations continued in the streets through the 4th of  September.  On the third night 1500 protested, and some attacked City Hall with rocks, bottles and bricks.  Fights with police ensued.

One group led by Ramon Rivera of Oye and supported by Amiri Baraka, met with Mayor Alfonso Roman of the Puerto Rican congress of New Jersey. Sigredo Carrion of the Puerto Rican Socialsit Party also spoke to the crowd asking for calm. Fernando Sambra, of the urban coalition declined to be in the mayor’s investigation committee when he learned of the other members. In the meantime, police squads roamed, clubbing people, including those apparently trying to get away from the protests.  That night, the mayor had to negotiate with two distinct factions demanding negotiations. Firemen responding to the burning police car were attacked with rocks.

Two killings (likely by police) and six injured by gunshot led to more violence and this time businesses were attacked. One beaten by police and possibly trampled by a horse later died on September 5th, the other shot by a shotgun blast. Four days of rioting followed the first killing.  In either case, the police did not claim responsibility, nor did they identify the killer.

No police reported firing his weapon and the implication was that these killings amounted to targeted murders—what Olga Jimenez labaled a “conspiracy of silence” (Jimenez, 8).  A grand jury on the disturbances found in February 1975 that the shooting of“civilians” were caused by Newark Police. But the grand jury also put blame on “fringe groups” who took advantage of the crowd and engaged in gambling, alcohol consumption and sale of food, all prohibited by park regulations.  Fifteen were indicted for disturbance and charges.  The police were chastised for not following protocol in the use of weapons.  Puerto Rican action committees immediately attacked the statement as “hypocrisy.” A judge ordered an internal investigation by the police itself.  The committee identified the officer responsible for the clubbing death and indicted him, but a trial resulted in an acquittal.  According to Olga Jimenez, politics in Newark presented a distinct twist, with Puerto Ricans resisting the demand by Black officials that they identify as such, which Puerto Rican’s refused because of the community’s multi-racial, integrated approach to race. Relations with white officials were no better.

Outside the mayor’s office a PA system was set up: “Que viva Puerto Rico libre….”  An erroneous statement that the child had died led to people rushing city hall, while police ran towards the crowd of 2000 Puerto Ricans.  The mayor threw himself in the middle and avoided major bloodshed.  Police lined up in front of city hall, aiming guns at the angry crowd.  When the crowd marched down street chanting to the park, police squads arrived again and started beating on people, shooting and scattering the crowd.

Next day a protest of 2000 people gathered by afternoon. People demanded to see the mayor, throwing bottle at his office.  Police poured in from all sides, smashing people. David Perez was beaten here and died shortly thereafter.[10]

LEARN MORE ABOUT THIS TOPIC Puerto Rican New Yorkers: Workers, Unions and Politics In the Struggle for a Better Life, 1910s-1960s