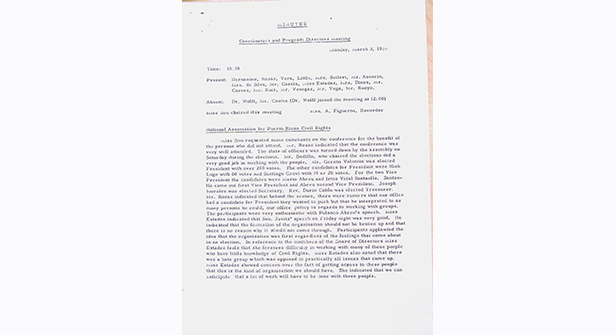 In years after World War II, New York was the most advanced state in anti-discrimination legislation and had a robust anti-discrimination establishment of organizations focused on equal rights for Jews and Blacks. When Congress refused to extend the wartime FEPC legislation, New York State enacted its own through the Ives Quinn bill which banned discrimination on the basis of color, religion, language, and national origin.[1] It followed on earlier efforts dating back to the 1930s banning discrimination in more restricted domains (i.e., public employment, public spaces, defense work, tax exempt entities).[2] The legislation was broad enough to reflect New York’s immigrant diversity. The legislation initially focused on work but was later extended to housing through the Sharkey Brown bill of 1950, and additional refinements to the law that created the New York State Commission Against Discrimination (SCAD). The establishment that came out of this legislation brought together Catholic, Jewish, and Black organizations and leaders, liberals and republicans. Much of the impetus in New York was the result of Jewish struggles since the 1930s to make discrimination illegal. The fight against local and European anti-Semitism was also an important aspect of this struggle, sharing strong antifascist politics that united Left and liberals but made it an easy target of the Right. Jewish groups were also strong supporters of the FEPC and its continuation after the war.[3]

The State Commission against Discrimination was created to enforce anti-discrimination legislation. SCAD carried out aggressive public propaganda work, including in Spanish-language media and organized local Community Councils. It also scoured the constitutions and rules of high skill unions, demanding that the ‘Caucasians only’ clauses be eliminated. It pushed employment agencies and hiring practices to remove the common race or religion specific, discriminatory language in job advertisements.[4] The Commission had some legal powers but its preferred method was pressure, conciliation and negotiation, accepting the limitations of its form by accepting seniority and apprentice practices that resulted in discrimination.[5]

Few Puerto Ricans had made use of SCAD’s authority in the immediate post-war years. Many community leaders thought that Puerto Ricans shared a cultural apprehension against acknowledging or complaining about discrimination. Writer Jack Agueros put it in these terms: "this pride and value of integrity is ancient. You can find it in El Cid, in the plays of Lope de Vega, in don Quixote. And you find it among the Puerto Ricans today. In America it debilitates them, it keeps them from filing complaints of violation of human and civil rights, from contesting employers' decisions before state referees and state agencies."[6]

SCAD’s means to end large scale employment discrimination were limited. Even though it had enforcement and mediation (as well as education) functions, its broad scope and weak enforcement context meant that it managed only limited inroads that relied on shame and visibility, especially with discrimination against blacks. Initially, it depended upon the injured to file complaints and remain present through the investigation process. Most of its complaints involved discrimination against Jews and Catholics. It's visibility and budget increased over the years as black leaders fought to ehance its functions throughout the 1950s. Later in the decade SCAD carried out its own major investigations of discrimination in a systemic, industry-focused way and in many ways foreshadowing what federal anti-discrimination legislation would look like in the 1960s under the Civil Rights Act (1964) and the Equal Employment Opportunity Act (1972).

The sharpest teeth for anti-discrimination work in the courts would not appear until the 1960s, when New York State legislation authorized district attorneys to work with SCAD to pursue lawsuits against employers and unions. The politics of SCAD were not without controversy. Many civil rights leaders and organizations thought that SCAD was timid (like Herbert Hill, labor director of the NAACP), or that it should have been headed by an African American.[7]

Charles Abrams, appointed to lead SCAD in 1955, pursued labor issues more aggressively and reached out more consistently to the Puerto Rican community. Through the mid-1950s, of the 400 yearly complaints handled by SCAD, 10% were by Puerto Ricans.[8] SCAD would play a bigger role in the lives of Puerto Rican workers after 1955. For the first ten years 70% of complains involved color discrimination. Of 5,225 complaints filed in these ten years 300 were filed by Puerto Ricans. But after 1956 42% of the complaints were over national origin, overwhelmingly Puerto Rican, with 266 complaints filed in just four years (1955-1958) when Puerto Ricans also asserted their claims for support and attention from the City's labor movement.[9]  The vast majority of complaints by Puerto Ricans were over work place discrimination (90%), and mostly by factory operatives, unlike those filed by Jews, blacks and Italians, which originated in housing complaints and white collar jobs.[10]