Nicolas Guadalupe filed a complaint (in what he acknowledged was imperfect English) with SCAD in August 1958. Explaining that he represented many others who could not speak English, Guadalupe wrote: “This not a protest, not an accusation or a mutiny, we are just using our democratic rights, as American citizens.”  He complained of how Italian Americans treated them, writing, “Why do they have the better jobs, why can't we get a job as decent as theirs. Why Eastman Kodak don't hire no Spanish speaking personnel?” Why did the problems caused by one Puerto Rican create trouble for all of them? “This a "democracy" and such things shouldn't happen in a democratic country. Remember this, during the II World War and in the Korean War we did fight for the democracy cause. Lots of Puerto Ricans died in those foreign soils, all for the sane cause.” He had tried finding work at Gerber’s but found that only Italians got hired. And Puerto Rican rents were higher, apartments hunters were rejected as soon as they said they were Puerto Rican. “We wish we could see you personally to explain you lots of things more. But as we told you before our main problem is jobs, jobs, jobs, we are humans, we got to live someway.”[11]

It was the needs of rebellious Puerto Rican workers that pushed SCAD to add a Labor Advisory Committee in December 1956.[12] ILGWU Local 22 president Charles Zimmerman was named labor advisor to SCAD’s Labor Committee, with Jose Sanchez of the Amalgamated Laundry Workers joint board and David Livingston of District 65.[13] Zimmerman, was among the most important Jewish union leaders involved with Puerto Rican working class issues.The contact and negotiation between Abrams of SCAD and these labor leaders was ongoing.[14] By the mid-1950s, journalists in the Spanish press knew to refer complaints by workers to SCAD as well as the Migration Division.[15] The Migration Division also translated some of the published or radio work created by SCAD.[16]

One notable intervention with Puerto Ricans was the mass protest against Bronx Lido Toys factory in 1956 by 75 Puerto Rican women.[17] At Stellar Tool Manufacturing in Queens, 60 mostly Puerto Rican workers filed a complaint “charging that the Spanish workers were receiving wages far below that of the norm.”[18]

By the mid-1960s it would be Puerto Ricans running SCAD and COIR’s inheritors. SCAD became the State Commission for Human Rights, and Ruperto Ruiz, former SCAD investigator and founder of the Spanish American Youth Bureau, was appointed director. John Carro was hired as a legal investigator, while Juan Aviles and Juan Sanchez were appointed to positions within the CCRC. 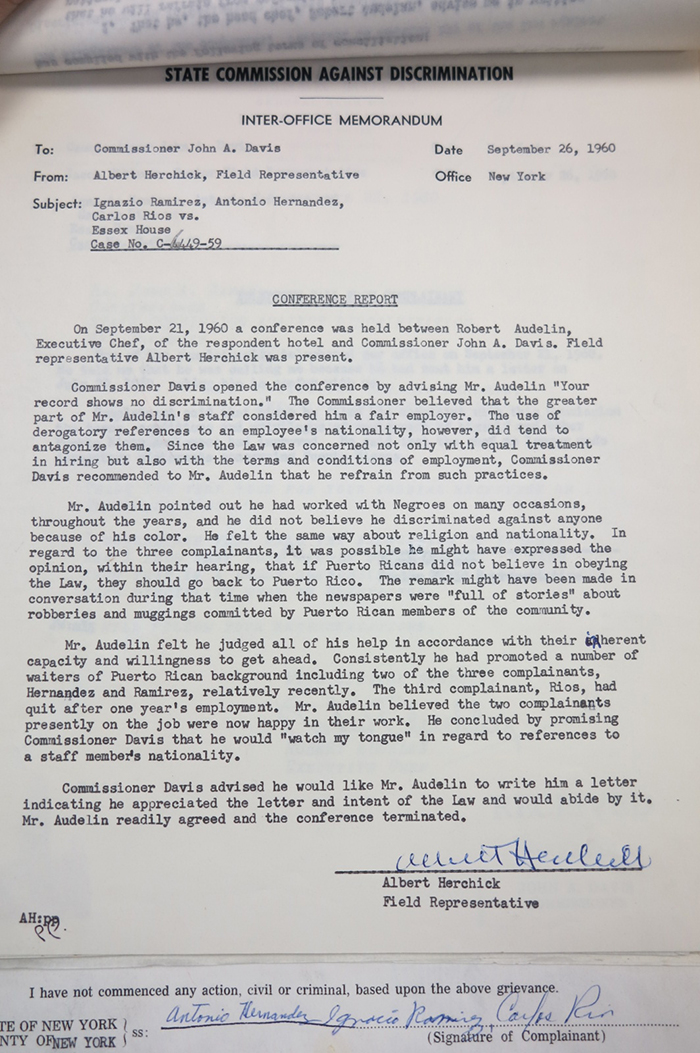 The City of New York pursued a more local approach to racial and ethnic conflicts or discrimination. Mayor La Guardia had created a “committee on unity” which did little work relating to Puerto Ricans. It was continued by Mayor O’Dwyer. In 1950 officials asked O’Dwyer to add a Puerto Rican member, and Manuel Cabranes, first director of the Migration Division, became the committee’s first board member.[19] The Committee on Unity had little power and no funding—its entire budget of $5000 came from Rockefeller Jr. and other corporate donations. The CU handled cases of “neighborhood tension,” especially when blacks and Puerto Ricans began moving into formerly homogeneously white neighborhoods.[20] Inevitably, it was open to wrangling about representation between Black and Jewish organizations. Its relationship with Puerto Ricans was minimal while the Mayor’s Committee on Puerto Rican affairs existed; but when both were merged into the Commission on Inter-Group Relations (COIR) in 1958, its mandate expanded, and its Puerto Rican agenda and personnel grew as well.

For these public entities and the many private organizations, the challenges were daunting, as noted by recent histories of whiteness and the black Civil Rights movements in the North. Daniel Dodson, one of the prominent white activists against racism and head of the MCU, made a simple balance sheet on race relations in NYC in 1946.[21] On the positive side, New York City had the Ives Quinn act, the country’s first state anti-discrimination law, to work with, which (began to) "integrate" public housing and civil service, strong support for a meritocracy and “ideals of liberty and equality which are constantly violated but exist in our culture” and an infrastructure of anti-discrimination organizations. But the city also faced the reality of white racism: as expressed in surveys, half of white New Yorkers would not accept a black person as a friend, and an even higher percentage would not accept black neighbors.This, in conjunction with persistent anti-Semitism, created an economy that “did not meet people’s needs,” and which generated multiple hate groups and discriminatory practices.[22]

[12] Newsletter of the State Commission against Discrimination, December 1956, 1:1.