The most powerful anti-discrimination organizations coming out of WWII years were Jewish, and they would turn their attention to the problems of Puerto Ricans as their own communities became accepted as white, moved to the outer rings or suburbs, and abandoned a Jewish identity. In the following 15 years, Jewish organizations fought legal and political battles to end discrimination against Jews.  But anti-black racism had deeper roots and was a more intractable problem for the mayor’s office.

The City under Mayor Wagner, with less coercive power than the state and with a stronger focus on local community relations, developed a Committee on Inter-Group Relations (COIR) which focused on helping communities manage conflict and create integrated or anti-discriminatory organizations and events. COIR was Wagner’s attempt to mediate local conflicts, especially between blacks, Jews and whites. It would hold hearings and design interventions, especially during crises, complaints of housing discrimination and youth conflicts. COIR reflected Wagner’s proactive liberalism on racial and labor conflicts, but also his preference for methods that emphasized unity. For this reason, he abolished the MCPRA and merged its functions into COIR. But by 1956, Wagner had to establish a Puerto Rican issues committee within COIR in order to deal with the growing complaints and conflicts from the community.  The mayor’s assistant explained: “the mayor is still of the opinion that American citizens who reside in New York, whether originally from Puerto Rico, Oklahoma, Alabama, or any other place, should have their problems treated in similar fashion.” However, it was clear that Puerto Ricans either merited or demanded more attention.[23] It was in COIR that Antonia Pantoja began her career in civil rights work. She was appointed to COIR in 1955 as a result of a massive letter writing campaign to Wagner in June, when he abolished the MCPRA.[24] 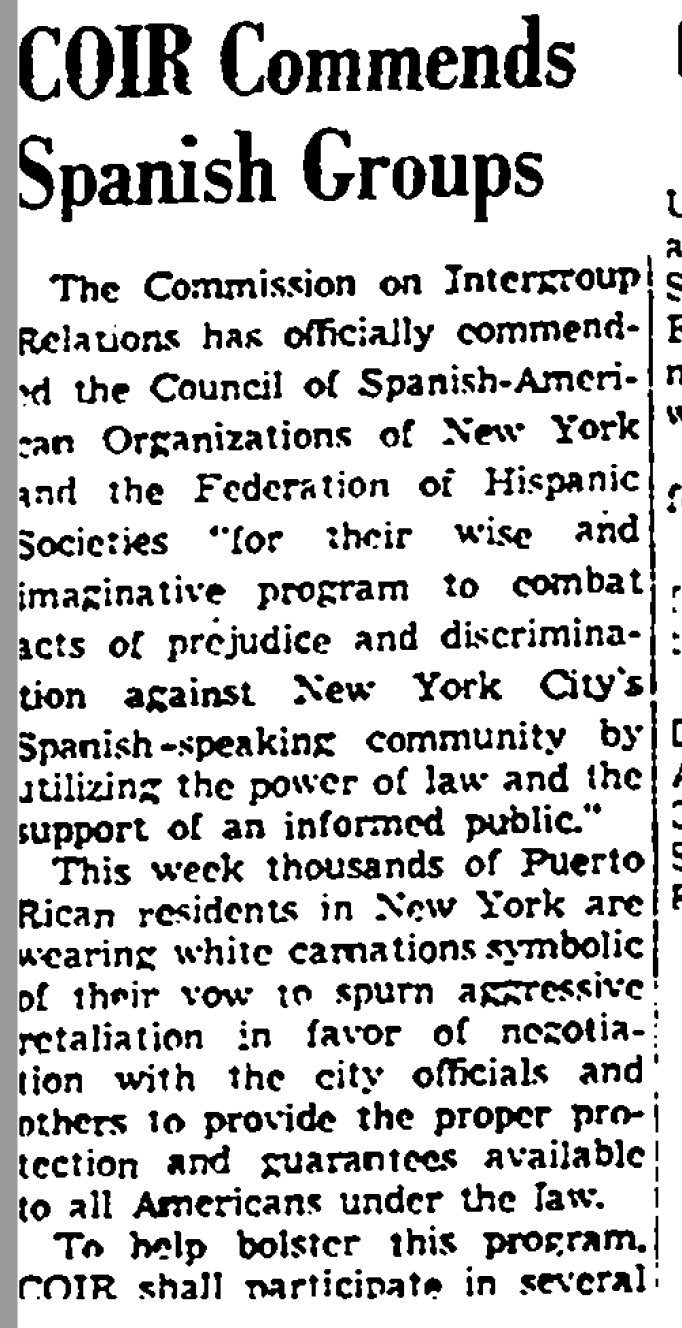 COIR, like SCAD, kept in close contact with labor organizations, especially when they addressed civil rights and housing or social service needs, as well as the Migration Division of the PR Department of Labor.[25] In the post-war years, “Inter-group relations” was a language, a social science and social work approach and field, and a response by liberal politicians to racial and ethnic conflict.[26]

The COIR correctly emphasized that the “problem” of race was not simply a Black or Puerto Rican problem, but one that lay in managed solutions involving all parties.  With the new focus in the 1950s on abolishing discrimination in housing, the city had many opportunities to improve the options available to blacks and Puerto Ricans and to mitigate conditions. COIR faced a daunting task. Sometimes it could minimize conflict and mediate agreements, but it could not wrangle either with the everyday insults that were the product of both racism and the ethnic tribalism of NYC social life, nor change the minds of the significant segment of New Yorkers who espoused white supremacist or nativist views.  By the time COIR was renamed and restructured into the City Commission on Human Rights in 1965, Puerto Ricans had become a central focus of COIR’s work. The CHRC became a major player in trying to provide access to construction jobs for Blacks and Puerto Ricans in the 1960s.  It also sponsored the “ethnic survey” of city employees in 1964. Gilberto Gerena Valentin was appointed to direct the CHRC in 1966.

The anti-discrimination establishment was much bigger than the state and city agencies. New York’s’ working class and middle-class liberals and leftists had formed large networks of organizations and coalitions that expanded their efforts after WWII. On the west side of Manhattan, for example, the “west side committee on civil rights” created a broad multiethnic coalition of Civil Rights organizations. In 1949, their “Bill of Rights Day” included representatives from the Association for the Advancement of Puerto Rican people, the Spanish-American youth bureau, various Jewish and Catholic groups, the Negro Labor Committee, the Morningside Community Center, American Veterans Committee, B’nai B’irth, and sleeping car porters.[27]Similar coalitions appeared in parts of the Bronx and Brooklyn; and on Manhattan’s east side: the Committee on Civil Rights in East Manhattan, the Spanish American youth bureau, Black, Japanese, and Jewish chambers of commerce. They carried out a major campaign to research discrimination against blacks in restaurants in midtown, with of strategy of research, followed by ‘continuous pressure and negotiations,” and plans to move on to housing work.[28]

The largest anti-discrimination organizations were focused on Jewish and African Americans.  Puerto Ricans would relate to these organizations in different ways, sometimes learning from the inside and other times seeking their support for their own efforts. Many Jewish leaders and organizations were supportive of Puerto Rican needs through the 1960s. Within labor organizations, in many local communities, mixed Puerto Rican and Jewish neighborhoods, and throughout, both explicitly Jewish organizations and of leaders of Jewish background, both liberal and leftist, abounded. 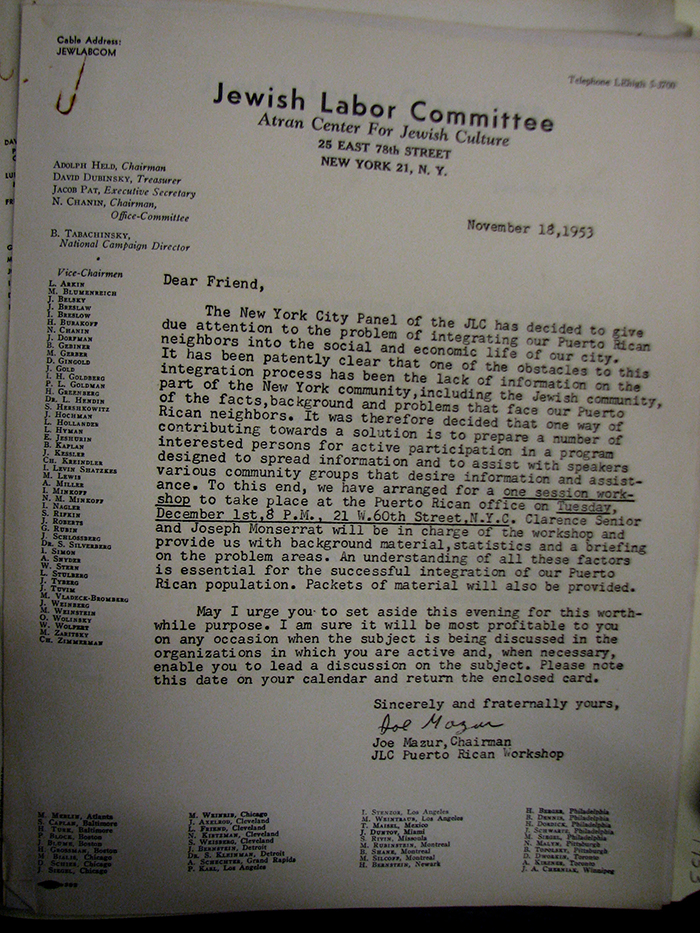