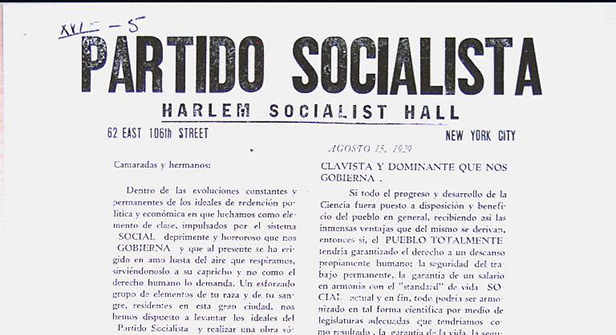 The Socialist Party’s extensive resources were an important source of support for Puerto Rican working-class leaders at many levels. The Rand School trained many Puerto Rican leaders and activists, including Luis Munoz Marin, Jesus Colon, and Bernardo Vega.[12] The school even operated in the East Harlem Headquarters of the Socialist party at the Harlem Terrace.[13]

Puerto Rico's Partido Socialista, founded in 1915, and rooted in the class politics of the Federacoin Libre de Trabajadores, the alliances of skilled artisans and town proletarians, had shown its power in the elections of 1918 and quickly became a significant political force. An early participant in these politics, a Partido Socialista member in Puerto Rico who even served as a delegate to a Socialist Party convention in St. Louis, Luis Muñoz Marin shared street corner rallies, public lectures and harangues with Puerto Rican workers in Harlem. Munoz Marin joined the Socialist Party in 1919 and immersed himself in New York’s multi-ethnic socialist world. On his initial return to the island in 1920, he stood to the left of Santiago Iglesias, his mentor, and many other national leaders of the Partido Socialista, rejecting political alliances with bourgeois parties.[14]

Munoz Marin, like most Partido Socialista leaders, were convinced that the future of social reform in Puerto Rico was tied to the future of socialism in the US.[15] Like most Puerto Rican socialists of the 1920s, Munoz Marin was not a radical revolutionary but believed in gradual, pragmatic and electoral change accompanied by militant class-based activism.[16] In 1920, when visiting the island, Munoz Marin became Santiago Iglesias’s secretary and joined him on his local campaigns in support of striking workers throughout the island, where he became a “fiery speaker,” as eclectic as Puerto Rican island socialism.[17]  Despite this, his socialism, like that of the Partido Socialista, was tamer. Munoz Marin’s education as a socialist is described by his biographers as Fabian, consistent with democratic, evolutionary socialism which had few maps on how to achieve socialism other than through electoral means and had much in common with radical liberalism.[18]

By the mid-1920s, Puerto Rican working class organizing in New York City had matured into its own organization. The Alianza Obrera emerged as a supporter of the Socialist Party and Partido Socialista politics--a transnational bridge connecting working class needs and organizing in both places. Puerto Rico’s bitter political and class fights of the 1910s and 1920s found echo in New York. The Alianza Obrera Puertorriquena, was founded on Labor day in 1923 at Terrace Hall by the emerging leaders of the socialist and cigar workers movements including Jesus Colon, Bernardo Vega, Eloy Franquis, Luis Munoz Marin, Prudencio Rivera Martinez, Lupericio Arroyo, and Eduvigis Caban and others.[19] By some counts, the crowd was between 600 and 1000 people, but the large turnout made it clear to La Prensa that “la Alianza manda en el lado este de la cuidad." At the Alianza’s founding rally, diverse political positions were presented.

The Alianza, was created in a contest with other more conservative sectors in the Puerto Rican community [20] served as the link between Island and mainland socialist and working class politics.[21]  The Alianza could draw hundreds of workers to its meetings and rallies especially when Munoz Marin, Santiago Iglesisas or US Socialist leaders led the billing.[22] Including the most important political meetings of the 1920s.[23] The Alianza sponsored rallies including one celebrating—in the tradition of the AFL—labor day. Jesus Colon described the speeches to over a thousand workers assembled in East Harlem in an editorial for Caribe, spoken in support of the worker’s movement on the island. Luis Munoz Marin, Lupericio Arroyo, Prudencio Rivera, Santos Bermudez and Pedro Esteve debated working-class politics.[24] The Alianza received an official endorsement of its links to Puerto Rico's socialist and labor movement from the 1924 convention in Arecibo, rejecting the “buscones” of the middle-class civic associations that shared the growing south Harlem settlement.[25]

Most Puerto Ricans continued to support the Socialist Party throughout the late 1920s but the1929 depression began the near complete reconfiguration of politics in Puerto Rico and New York. The Partido Socialista’s electoral alliance with the Partido Republicano in 1932, signaled the break of most New York workers and leaders with the Partido Socialista. It also brought a slow transition between 1929 and 1934 of the community’s leaders from the orbit of the Socialist Party to the Communist Party.