Testimonies of the Depression 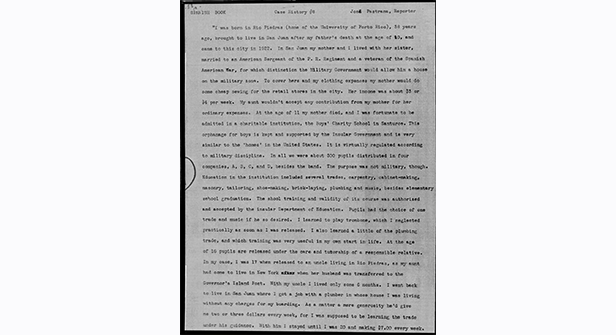 The Works Progress Administration interviews made in New York City’s Hispanic Community in the late 1930s provide a gold mine of voices of Puerto Rican and other Latino migrants. The WPA sponsored massive research projects in the US’s regional, ethnic/racial and immigrant cultures. The research materials on Hispanics were gathered towards a book, The Spanish Book, that was never published. I made these syntheses from the interviews as a way of offering a window into how Puerto Ricans experienced the Depression. WPA interviews do not provide the full name of the interviewee.Sometimes they refer to the person with their initials and sometimes by a number.

A plumber from Santurce who ended up working at the National Biscuit Company could only find erratic jobs “working when and wherever,” which also meant moving to the worse tenement conditions of Spanish Harlem. He and his family “suffered horribly.”  A charity organization helped him for a year, before he found himself work as a porter for $22/week. He then found work at an automat at $24/week but lost this job when he got sick. He then worked as a dishwasher, while one of his children died.  Finally, he got into the city’s WPA-funded relief program in 1937 while unemployed. All the same, he was proud, saying, “I manage to carry on the burden of keeping my family away from starvation.”

One Depression-era migrant who arrived in 1934 was more upbeat about conditions by 1938: “Now I feel much different. Hope I never have to go back home; at least, while I can make a decent living here in the states and can afford to take care of my family.”  Another story of marginal improvements came from a trained carpenter, also from Santurce, who travelled to New York as a mess boy on a ship, and then started as a $14/week dishwasher working 10-hour days, six days a week, somehow still managing to bring his family up from the island.  He then worked nights as a cook making $20/week, feeling “more ambitious” now that his family had joined him, even managing to buy furniture on terms. But his conditions improved further with a promotion to first cook and the arrival of union Local 302 of the Hotel and Restaurant Employees Union. With wages of $35/week, they managed to save some money while still living in a tenement in bad conditions in east Harlem.

Another educated child of modest farm owners in Fajardo migrated after family tragedy devastated his resources. At first, he found work at the Eveready battery factory doing clerical work for $15/week. His work life was sent into a spin with the Depression, which brought on unemployment. He then took work “wherever,” including in a garage, washing cars for $22/week, and then driving a taxi.  For two years he had “not had a decent job,” so he managed to get relief payments, having no luck finding alternative employment. Another migrant decided New York offered better possibilities, given the “alarmingly depressing” conditions on the island once the Depression started.  In New York he worked with friends who owned a moving van, but work was irregular and earnings low, $13 to $20. When his friend leased him a new truck, he did well even through the early years of the Depression, which meant working very long days moving many evicted tenants. But when conditions improved his clients stopped moving, and he was forced to apply for relief in 1936.  After two months his application was accepted but only because of the support of the Communist Party-led Harlem Workers Alliance Unemployment Committee. Three years later he and his family still relied on relief payments and his irregular “odd jobs.”

An early migrant who was a WWI US Navy veteran with a high school education had settled in NYC in 1919.  He first worked as a “common laborer” at the National Biscuit company, like so many other recent arrivals. Because of his skills he quickly advanced from production to clerical work, increasing his average wage from $22/week to an excellent rate of $35/week. But he was laid off in 1933, after 14 years at the plant. To survive he received Relief payments from the city during the “hectic” deep Depression years, and eventually got a WPA job with a city construction project for $56/month.

From Maricao, an apprentice baker with high school studies migrated in 1928 soon after his parents died. $35 for bakery workers was the reputed weekly wage that a migrants, making only $6-9/week on the island, could find attractive. His first jobs as a pantry man in the Hotel Commodore earned him $55/month but did not last long. Long 12-hour days at a cafeteria earned him $15 and $19/week, and he was unable to finish his high school degree studying at night.  A shoe factory in Brooklyn shortened the work day for the same wages and allowed overtime work.  With the Depression, a downward spiral began with his job as a kitchen helper for $18/week.  “Restaurants hire many Puerto Ricans and Cubans for kitchen work and the like, but we can never get ahead…They lay us off often to get others in lower salaries and we can never get taken on as waiters, even with waiter experience we cannot get place as they prefer Italian, French or Germans as waiters.” After a brief return to Puerto Rico to see how things turned out he returned to New York with his wife. A new restaurant job in “terrible conditions” paid only $14.40/week he found no time for night school because he was “so tired that I couldn’t get anything out of my classes” with the promise of bringing a union to the restaurant to reduce the work day and hopefully “be able to go to school.”

A coffee picker from Coamo left Puerto Rico because life was “very hard.” He did hotel and restaurant work, and when the Depression hit, “many illusions concerning the advantages of living in a big modern city vanished somewhat.” He was forced to shift from one hotel to another until he became unemployed, with brief stints in public work with the WPA and relief.  Joining the Workers Alliance also helped secure clothes for his family, and the City’s Harlem Hospital provided free care for his kidney trouble.

Continue to Testimonies of the Depression Page 2