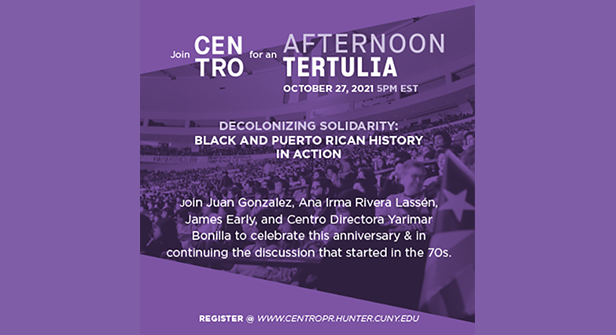 Grab your snacks and join us for another Afternoon Tertulia on October 27th at 5PM EST! October 27th, 1974 marks a historical event at Madison Square Garden between the African American community and the Puerto Rican community in support of decolonizing Puerto Rico. These communities have worked together in the past and continue to work together today in their collective struggles against oppression and colonization.

Juan González has been a prominent social activist, journalist, and scholar for more than fifty years. A staff columnist for New York’s Daily News from 1987 until 2016, he has also been the familiar co-host of the progressive daily news show Democracy Now for the past twenty-five years, and is currently the Richard D. Heffner Professor of Communications and Public Policy at Rutgers University.
His investigative reports have garnered numerous accolades, including two George Polk awards for commentary and a Leadership Award from the National Hispanic Heritage Foundation.
González is author of five books, including the classic Harvest of Empire: A History of Latinos in America, and News for All the People: The Epic Story of Race and the American Media, a New York Times best-seller and a finalist for the Robert F. Kennedy Award.
A founder and past president of the National Association of Hispanic Journalists, González was the first Latino to be named to the Society of Professional Journalists’ New York Journalism Hall of Fame and has also been elected a Fellow of the New York Academy of History.
During the 1960s and 1970s, he was a founder and leader of the New York Young Lords, and was chief organizer and the first president of the National Congress for Puerto Rican Rights.
Born in Ponce, Puerto Rico, he was raised in East Harlem and received his B.A. degree from Columbia University, where he was a leader of the historic 1968 Columbia student strike against the Vietnam War.

Ana Irma Rivera Lassén, is a lawyer, feminist activist, and human rights advocate. Her activism has been focused on the fight against racism and discrimination against women, sexual orientation and gender identity, among others. Her trajectory includes being a co-founder of several important organizations dedicated to these causes.
She earned a Juris Doctor from the University of Puerto Rico and has been an adjunct professor at the Interamerican University Law School in San Juan. She is the author of articles, essays, short stories, and poetry that have been published in anthologies and newspapers both in Puerto Rico and internationally.
In conjunction with Doctor Elizabeth Crespo Kebler, she published the book Documents of Feminism in Puerto Rico: Facsimiles of History. This book about the feminists movements of the 70’s is considered an important contribution to the study of the role of women in the history of Puerto Rico, the Caribbean, and Latin America.
She is a member of the Consultative Council of the Latin American and Caribbean Committee for the Defense of Women’s Human Rights and the Consultative Council for the Afro Latin American, Afro Caribbean, and Diaspora Women’s Network. President of the Colegio de Abogados y Abogadas de Puerto Rico (Puerto Rico Bar Association) for the years 2012-2014.
Former President of the Movimiento Victoria Ciudadana political party for which she is currently Minority Whip and Senator at Large in the Puerto Rico Senate and President of the Senate Committee for Human Rights and Labor Matters.

Prior to work with the Smithsonian, James Early was a humanist administrator at the National Endowment for the Humanities, Washington, DC; a producer, writer, and host of "Ten Minutes Left," a weekly radio segment of cultural, educational, and political interviews and commentary at WHUR FM radio, Howard University; and a research associate for programs and documentation at the Howard University Institute for the Arts and humanities, Washington, DC.

Yarimar Bonilla is the Director of the Center for Puerto Rican Studies at Hunter College. She is also a Professor in the Department of Africana, Puerto Rican, and Latino Studies at Hunter College and in the Ph.D. Program in Anthropology at the Graduate Center of the City University of New York. She is the author of Non-Sovereign Futures: French Caribbean Politics in the Wake of Disenchantment (2015) co-editor of Aftershocks of Disaster: Puerto Rico Before and After the Storm. (2019) and a founder of the Puerto Rico Syllabus Project.