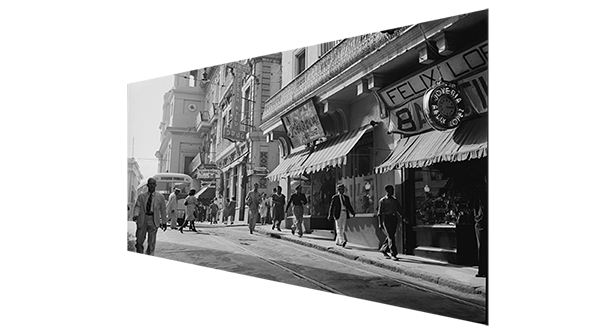 Historian Aníbal Sepúlveda Rivera argues that San Juan, capital of Puerto Rico, has been re-founded twice. There is the first well-known re-foundation of 1521, when the capital was moved from a mosquito-infested swamp unto the islet it currently occupies; but there was a second re-foundation that happened around the late 1940’s, when the capital first experienced an almost uncontrolled suburban expansion. This happened during the aggressive industrialization of the island in the post-war years; it is also when the diaspora to the United States, particularly in New York City, grew massively. This conversation between Anibal Sepúlveda and curator Monxo López will investigate this curious argument.

Monxo López teaches Latino Studies and politics at Hunter College’s Department of Africana, Puerto Rican and Latino Studies; he is a cartographer/GIS specialist, South Bronx-based environmental activist, founding member of South Bronx Unite, and board member of the Mott Haven/Port Morris Community Land Stewards, the South Bronx’s local Community Land Trust. He holds a Ph.D. in political science from CUNY’s Graduate Center, and an MA from Université Laval in Québec, Canada. His academic research revolves around spatiality, mapping, social justice, political theory, and Latino communities. His political writings on spatial and social justice have been published on Salon.com, LatinoRebels, and NACLA, among other places; his activist work has been profiled by The New York Times, UrbanOmnibus, and Corriere della Sera.

Dr. Aníbal Sepúlveda Rivera is a historian, author, and retired professor at the Graduate School of Planning at the University of Puerto Rico. He has multiple publications including “Acueducto: Historia del Agua en San Juan” and “Historia Ilustrada de su Desarrollo Urbano (San Juan)”. Dr. Aníbal Sepúlveda Rivera studied in the University of Puerto Rico where he received his bachelor’s degree and then completed his doctorate in Cornell University in New York.