Webinar: The Puerto Rican Experience in the U.S. Military 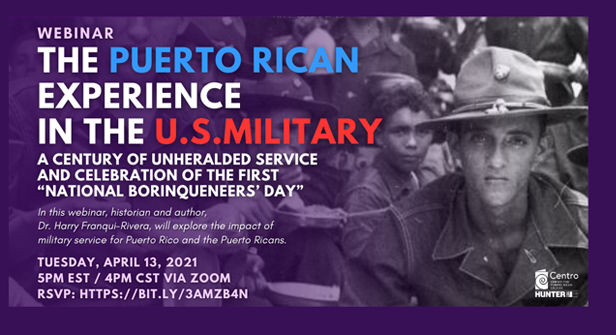 The Puerto Rican Experience in the U.S. Military: A Century of Unheralded Service
And Celebration of National Borinqueneers’ Day

The impact and meaning of the Puerto Ricans’ service in the armed forces of the United States go beyond mere numbers. Their service has served to disperse Puerto Ricans across the United States and the world creating new communities beyond what we understood as traditional diaspora centers. Military service, in particular during the WWII-Korean War period, also served to build modern Puerto Rico, and for Puerto Rican colonias turning into full-fledged communities to stake a claim of belonging. In this Webinar historian and author, Dr. Harry Franqui-Rivera, explores the impact of military service for Puerto Rico and the Puerto Ricans.

Puerto Ricans started fighting as auxiliary forces to the U.S. military in 1898. Since then, hundreds of thousands of Puerto Ricans have served in every small and major conflict in which the United States has participated. This publication intends to show the scope of the Puerto Rican experience in the U.S. military without lionizing nor demeaning it. This project hopes to inspire the public and scholars to look into this under-studied phenomenon.

On April 13, 2016, Congress awarded the Congressional Gold Medal to the 65th Infantry Regiment in recognition of the Borinqueneers’ numerous contributions to American history and outstanding military service from World War I to the Korean War. Learn more:

Borinqueneers Day and the Korean War in Puerto Rican History and Memory
In this essay, Harry Franqui explores the meaning of the Borinqueneers’ sacrifices for Puerto Rico and the Diaspora. “Let us remember that they represented the hopes of a people willing to sacrifice their youth for a better future, to pay a tribute of blood in search for acceptance, respectability, equality, a path towards decolonization, and a democracy that has proven elusive to them.” https://centropr.hunter.cuny.edu/centrovoices/chronicles/borinqueneers-day-and-korean-war-puerto-rican-history-and-memory

With Honor and Dignity: Restoring the Borinqueneers' Historical Record
https://centropr.hunter.cuny.edu/centrovoices/chronicles/honor-and-dignity-restoring-borinqueneers-historical-record

Puerto Rican Voices Season 3, Episode 7: The Pride of Our People
In this episode of Puerto Rican Voices, Harry Franqui-Rivera narrates the history of the 65th Infantry Regiment and describes events in Washington D.C. and New York which were held to commemorate the award. Watch the full segment here:
https://centropr.hunter.cuny.edu/centro-tv/puerto-rican-voices/pr-voices-s3e7-pride-our-people

Explore The Puerto Rican Experience in the U.S. Military: A Century of Unheralded Service
https://centropr.hunter.cuny.edu/digital-humanities/pr-military

Dr. Harry Franqui-Rivera is an Associate Professor of History at Bloomfield College, N.J. He is a prolific published author, documentary producer, public intellectual, cultural critic, blogger, political analyst, and NBC, Latino Rebels, and HuffPost contributor. His work has been featured in national and international media outlets, Telemundo, the New York Times, and NPR. His latest book, Soldiers of the Nation: Military Service and Modern Puerto Rico, (2018) has been widely praised. His next book, Fighting on Two Fronts: The Ordeal of the Puerto Rican Soldier during the Korean War will be published by Centro Press. He served in the U.S. Army Reserve and National Guard for over a decade and currently serves in several academic, advocacy and policy boards such as the National Puerto Rican Agenda.  Contact: harryfranquirivera@gmail.com

Laura Lee Oviedo is a project historian for the Philanthropy Initiative at Smithsonian's National Museum of American History, where she was also a curatorial fellow for the Division of Armed Forces History and project historian for the War & Latinx Philanthropy Initiative. As a Ph.D. candidate of History at Texas A&M University, her research examines how war and militarization impacts Latinx communities and shapes their understanding of identity, rights, citizenship and belonging.