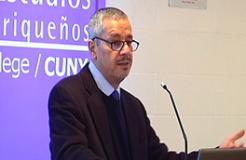 Researcher, Ph.D., Luis O. Reyes was appointed as a Research Associate at the Center for Puerto Rican Studies, Hunter College, CUNY, in 2010. He serves as Centro’s Director of Education. Dr. Reyes has served as assistant professor in various education departments, including Lehman, Hunter, Brooklyn and Baruch Colleges, CUNY, and at Long Island University, Brooklyn Campus. Dr. Reyes received his PhD in Social Sciences in Education from Stanford University in California, and an MA in Spanish Literature from Middlebury College in Vermont.

His publications include an article in the Harvard Educational Review (October, 2006), on the 30th anniversary of the ASPIRA consent decree that established the legal right for Puerto Rican/Latino students in New York City to receive bilingual education instruction. His most recent article, “Minding/Mending the Puerto Rican Education Pipeline in New York City,” was published in the fall 2012 issue of the CENTRO Journal. Dr. Reyes has a chapter entitled “Rebuilding the Puerto Rican education pipeline for a multilingual/multicultural future” inPuerto Ricans and the dawn of the new millennium, to be published by the Center for Puerto Rican Studies in 2014 (E. Meléndez and C. Vargas-Ramos, eds.).

Dr. Reyes was ASPIRA of New York’s Director of Research and Advocacy in the 1980s. He served as a member of the New York City Board of Education in the 1990s, coordinated the Coalition for Educational Excellence for English Language Learners (CEEELL) between 2002 and 2009 and is a founding member of the Latino Coalition for Early Care and Education (LCECE).

At Centro, Dr. Reyes managed the Cultural Competence Initiative (CCI) at Hunter College funded by the Fund for the Improvement of Postsecondary Education (FIPSE) between 2009 and 2011, which promoted the development of advanced academic cultural competencies and professional practice in social work, public health, education and urban planning, areas in which Puerto Ricans graduate and doctoral students are underrepresented.