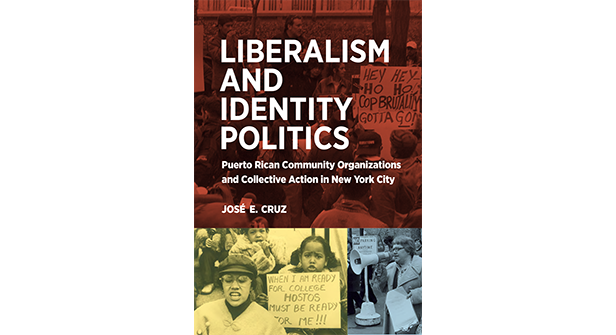 Liberalism and Identity Politics: Puerto Rican Community Organizations and Collective Action in New York City is a recollection and analysis of ethnic identity in Puerto Rican politics in New York City between 1960 and 1990. The book argues that Puerto Rican politics at the community level was a politics of identity rooted in liberal democratic values. Puerto Ricans provided an example, from the ground up, that transcended the alleged incompatibility between liberalism and identity politics. This relationship was not free of problems but it was workable, contrary to what other scholars have claimed. The book deploys its evidence in the form of a historical collage to suggest that through strategic and demand-protest activities Puerto Ricans articulated and promoted a liberal form of identity politics in which ethnic identity and the idea of group rights provided a platform for the production of both individual and collective goods. The book illustrates how Puerto Ricans in New York City sought participation, recognition, redress of grievances, and inclusion along liberal democratic lines. In other words, their community politics blended liberalism and group rights, in-group identity and out-group commonality, not naturally but empirically, emphasizing the affirmation of difference and a commitment to legitimate institutional norms and values. Thus, the Puerto Rican record of community organization and collective action is a kernel of identity politics cum cultural citizenship within the shell of liberal democratic politics. In this account, the Puerto Rican addition of an identity component to social liberalism stands as a reminder of the ways in which identity politics can be a sustaining force for liberal democratic values.

Chapter 1: The Context of Strategic Action and Demand-Protest

Chapter 2: To be Accepted as an American

Chapter 3: We Have our Own Problems Here

Chapter 5: Liberals for Justice and Progress

Chapter 6: The Most Serious Problem

Chapter 7: The Eyes and Ears of the Community

Chapter 8: We are All Liberals Now

José E. Cruz is an Associate Professor of Political Science and Latino Studies at the University at Albany, State University of New York. He is the author of Puerto Rican Identity, Political Development, and Democracy in New York, 1960-1990 (Lexington Books/Rowman & Littlefield, 2017) and Identity and Power: Puerto Rican Politics and the Challenge of Ethnicity (Temple University Press, 1998); coauthor of Adiós Borinquen Querida: The Puerto Rican Diaspora, Its History and Contributions (CELAC, 2000); and editor of Latino Immigration Policy: Context, Issues, Alternatives (NYLARNet, 2008).

Liberalism and Identity Politics details the discovery of ethnic and power awareness among Puerto Ricans from 1960s to 1990s as they seek to influence the Democratic process. Cruz argues that the richness of differences and diversity within the Puerto Rican community should not be view as distinct from Democracy, but rather a vehicle for making Democracy work… [The book’s] contribution lies in its analysis of the institutional position of Puerto Ricans outside of the political process. This book fills a gap within the literature of Latino politics, Puerto Rican politics, and identity politics… He draws the reader in and allows them to see the struggle for political inclusion from the subjects (Puerto Rican) side. Sharon Navarro, University of Texas, San Antonio More...

Thoroughly researched and richly documented, Liberalism and Identity Politics illustrates how there is not in fact a contradiction in practice in the operation of ethnic-based organizational mobilization in a liberal regime… A valuable contribution to the study of Puerto Rican political development and Puerto Rican political engagement in the paradigmatic urban center in the United States, Liberalism and Identity Politics captures a period of political maturation and assertiveness from a community at the margins of a political system that does not encourage easy entry into the political arena… José Cruz’s research and rich trove of detailed information open a vast area for future research for the next generations of scholars of Puerto Rican politics, and New York City politics and urban politics more broadly. Carlos Vargas-Ramos, Hunter College, CUNY

Centro Store 2022
Frequently Asked Questions When can I expect to receive my order? Books...